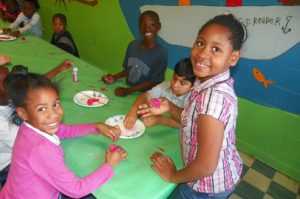 A new program known as Arts Renaissance in Tuscaloosa Schools (ARTS), is being spearheaded by faculty and students in the College and aims to share the creative resources generated at The University of Alabama with Tuscaloosa elementary schools. ARTS, which involves a multitude of arts-related workshops, is led by Dr. Marysia Galbraith, an associate professor in New College and the Department of Anthropology.

Currently, the program is offered at Woodland Forest Elementary School and Matthews Elementary School. Volunteers from the Tuscaloosa arts community and students in the College go to the school during school hours and put on workshops. Example workshops include dance, creative writing, decoupage and pottery making.

The idea for the program came when Galbraith saw a need for more arts education in schools, due to lack of funding. Because public schools are short on funding, they often have no choice but to scale back their arts offerings. Both of the schools that the program has been implemented in are Title I schools, which means they have a majority of the student population meet the criteria to received free and reduced lunch from the federal government.

In addition, Galbraith explains the value of arts education is far beyond cultivating future artists. In fact, she sees a direct correlation between arts education and an increase in problem solving ability, social interaction skills, and creativity levels. As both an artist and a scholar herself, Galbraith knows that students who are given an opportunity to explore the arts will become critical thinkers and innovators of the future.

Galbraith says one of the workshops that she received the most feedback on was a music workshop taught by Greg Banks, an undergraduate student in the College’s School of Music, who demonstrated traditional African drumming. Banks is a percussionist and member of the African Drumming Ensemble.

“The children were talking about it for months afterward,” Galbraith said.

Although the program has garnered much support from many volunteers and creative individuals in the Tuscaloosa area, Galbraith says there is always room for more. To find out how to get involved with the program, visit their website: www.tuscaloosaaw.com.