From the 2021 Collegian | Dr. Jacqueline Trimble’s first impulse after learning to read was to write, so at the age of six, she wrote her first piece of work: a one-paragraph autobiography. Though she talks fondly of the memory now, her accomplishments assure she has much more to add.

Trimble, who earned her masters and PhD at UA and serves as the chair of Alabama State University’s department of languages and literatures, was one of only 35 selected as a 2021 National Endowment for the Arts Creative Writing Fellow for poetry.

“It was very much a surprise,” Trimble said. “I got the call in November, and they said, ‘Congratulations!’ I thought, ‘This has to be a joke. They’ve got to be punking me.’”

With the fellowship comes $25,000, an amount Trimble hopes will allow her to take half of the summer off work to give her the time, space and atmosphere to write. Currently, she is writing a novel, a poetry collection, and working with a director to turn her poem, “The Language of Joy,” into a short film, among other ventures.

Though now busy with creation, Trimble has spent a majority of her career primarily teaching. She directed Alabama State’s honors program and served as department chair in American literature at Huntingdon College before serving in her current position. Everywhere she went, she used her own experience as a student to craft what she taught.

“In my formal education, there were not many people being taught who looked like me,” Trimble said. “Writers of all sorts of ethnicities became a normal and prominent part of my syllabus everywhere I taught, because they’re an important part of the American fabric of literature.”

Ten years ago, however, her husband could tell she was unhappy due to her lack of writing in the midst of her teaching, prompting her to apply to a writing workshop in Cape Cod. Suddenly, she was back writing poetry.

“It’s really an interesting time for me, having started another career, which I consider my writing career, after 50,” Trimble said. “That’s the great thing about being a writer. You just keep doing it. As long as the brain is functioning, you can keep writing.” 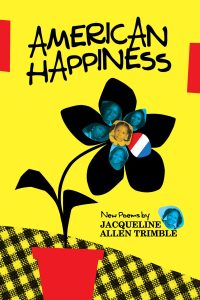 Her first poetry collection, “American Happiness,” came out in 2016, after a publisher approached her at a reading and offered to publish it.

“I’ve been writing ever since, going to workshops and learning as much as I can,” Trimble said. “Since I got my PhD and not my MFA, I sort of made my own MFA program by going to all of these retreats and workshops.”

She has since explored many other forms of writing, including writing episodes for a South African television show. Her passion for television shows, what she calls the fairytales on our time, led her to ask a friend to teach her about writing scripts, and she hopes to do it again in the future.

“I’m not wedded to genre, because I think writing is writing,” Trimble said. “Writing is about observation, understanding and clarifying, and it helps me understand the world.”

Trimble writes what she knows, with poems about her husband and sons (“A Woman Cohabitates with Three Men”), her mother (“The Language of Joy”), and social justice (“How to Survive as a Black Woman Everywhere in America Including the Deep South”). She describes herself as a Southern writer, fascinated with the irony and absurdity of being able to stand where Martin Luther King, Jr. did, look up and see where Jefferson Davis took his oath of office or George Wallace strategized in her hometown of Montgomery.

“Everything is right here together, and it always has been. I grew up on West Jefferson Avenue, and the cross street for West Jeff Davis Avenue is Rosa Parks Avenue. Where else can you live at the cross section of Jefferson Davis and Rosa Parks?” Trimble said. “To me, that’s writing gold. I look out my window, and I write what I see.”

While most of her colleagues are thinking about retirement, Trimble can only think about the future and all of the works she has yet to produce.

“I would like to leave a body of all kinds of work: essays, television shows, novels, books of poetry,” Trimble said. “Books and stories have given me so much pleasure my entire life. They’re significant in the world, because there’s something about them that lasts past our lifetimes and generations. My goal is to produce those.”