It was panned on release – so why are we hopelessly devoted to Grease 40 years later?: The Guardian – Apr. 20

When Grease was released in cinemas in 1978, a starry, bubblegum-bright adaptation of the 1971 Chicago-to-Broadway musical, the initial reviews were not kind… Dr. Barbara Jane Brickman is an assistant professor of media and gender studies at The University of Alabama. Last year, she published a book about the film called “Grease: Gender, Nostalgia and Youth Consumption in the Blockbuster Era.”

Two competing narratives of the Civil War and the Southern Reconstruction will intersect once again this week. This time, national attention over the opening of the nation’s first-ever lynching memorial will serve as the backdrop … Said Joshua Rothman, chairman of the history department at The University of Alabama, “The narratives sit side-by-side. When they are brought into the conversation with each other, you realize the narrative becomes more complicated than ‘Yes, we have both.'”

Three million dollars have poured into the Alabama lieutenant governor’s race as four candidates vie for a statewide position with limited responsibilities other than succeeding the governor … Analyst and former University of Alabama politics professor William Stewart said Ivey would be unlikely to run for a second term.
Florence Times Daily – Apr. 22

Alabama state Sen. Bill Hightower raised a few eyebrows during a debate among Republican candidates for governor when he traced a large portion of crime to a small portion of families in Mobile. . . . Still, criminologists were not surprised by the finding. “The general idea that a few people are engaged in a lot of problem behavior and criminal behavior makes a lot of sense and would be consistent with what we see with a lot of other types of crime,” said Adam Lankford, an associate professor of criminology and criminal justice at The University of Alabama.

Scientists have made a significant discovery about how a deadly virus infects juvenile salmon and steelhead in the Columbia River Basin. The finding could help hatchery managers protect their stock and ultimately release more fish into the ocean … “Knowing the relative role of these transmission pathways and probability of infection associated with the different transmission pathways will help managers evaluate what leads to the spread and transmission of this virus,” Dr. Paige Ferguson, study co-author and assistant professor of biological sciences at The University of Alabama, said in a news release.
Union-Bulletin (Walla Walla, Washington) – Apr. 26
NBC 6 (Pocatello, Idaho) – Apr. 26

Chikesia Clemons and Canita Adams were allegedly drunk when they arrived to a Waffle House in Saraland around 2:30 a.m. Sunday. They threatened employees and warned that they could return with guns, police said Monday … Erin Kearns, a criminal justice professor at The University of Alabama, said in the Tennessee tragedy, no amount of environmental design could have prevented Reinking from shooting inside the eatery … “What happened in Nashville, it begs the question on how to prevent these things from happening,” said Kearns. “It seems like nothing would have deterred him in that moment.”
The Buffalo News – Apr. 25

High school students can learn more about creative writing during a camp held at The University of Alabama. The UA Young Writers Camp will be held from 8:30 a.m. until 4 p.m .May 28 through June 1 at the Paul W. Bryant Conference Center, 240 Paul W. Bryant Drive. The camp is for rising ninth- through 12th-graders. Tuition is $225 and includes snacks, a T-shirt, and writing materials. Campers must bring a sack lunch. Information about need-based scholarships is available by emailing uacw@ua.edu.

We need to fight the water crisis you haven’t heard of: The Hill – Apr. 25

Four years ago today Flint, Mich., changed its municipal water source to the Flint River, moving a city of 100,000 residents towards a crisis that would poison children and impact families with long-term, irreversible health conditions … One study conducted by The University of Alabama and the University of South Alabama in 2006 found that a full 35 percent of inspected homes in Bibb County, Ala., had failing septic systems. 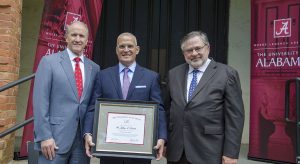 A University of Alabama alumnus has given $1 million to establish a new leadership program in the College of Arts and Sciences. The gift from Jeff Levitetz, a 1980 alumnus and founder and chairman of Purity Wholesale Grocers, on behalf of the Levitetz Family Foundation to support Levitetz Leadership Program in the New College, an interdisciplinary program, was announced on Thursday.
Birmingham Business Journal – April 27

Grace Kurosaka arrived at the University as a biology major with a dream of attending medical school, but she quickly realized that she wanted to take a different path. While she began dancing at the age of three, she did not begin contemplating the sport as a career path until she got to the University. Now, as a senior majoring in dance and biology, Kurosaka will be presenting an original dance show, “Carousel”  to her colleagues, peers and family. 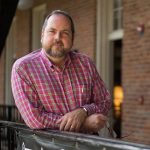 Russell McCutcheon, the chair of the religious studies department, was recently named a Distinguished Research Professor by the UA Board of Trustees. The recognition is one of the University’s most significant awards and has been received by fewer than 10 faculty members throughout the University’s history. The title is given to those faculty members who have attained international success with their work, often conducting world-renowned research while receiving thorough recognition from the most influential individuals in their field of study.

We are The Facility for Performing Arts Creative Training (The PACT), LLC. We are an instructional facility focusing on acting, dance and music for people of all ages, providing structured training through weekly classes, workshops and full productions … Along with directing, Jacob has been seen in many productions in the area as an actor. Jacob is currently an assistant director at The French Woods Festival of the Arts in New York all while finishing up his degree in Musical Theatre at The University of Alabama.