Tuscaloosa native Jessica Procter was crowned Miss Alabama at the annual pageant in Birmingham Saturday night.  Procter will go on to represent the state in the Miss America competition in September.

Miss University of Alabama Callie Walker made it to the top five.

Procter was representing Miss Leeds Area.  She is a UA junior enrolled in New College, majoring in interdisciplinary studies with a minor in psychology.  This is her third year to participate.

When Kay Ivey was sworn in as Alabama governor two months ago following the resignation of Robert Bentley, she told a crowd in Montgomery, “Together, we steady the ship of state.”

Her message hasn’t changed much since then. In interviews, Ivey has continued to emphasize her aim to steady the state government ship, while declining to address her political future. 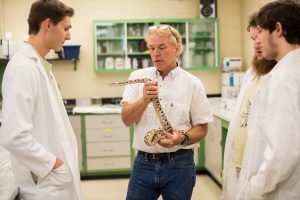 Could the answer to treating digestive ailments like diabetes and Crohn’s disease be slithering around in a laboratory at the University of Alabama?

Stephen Secor, a professor of biological sciences at UA, hopes so.

“This all kind of started as, ‘Hey, let’s do something crazy,’ and come to find out, we found these amazing results,” Secor said.

What has happened to civility? By “civility” I mean several things: politeness; the ability to listen to a contradictory opinion without knocking someone unconscious with your riot baton because they don’t agree with you; the simple human activity of entertaining different points of view from your own as possibly being valid; the absence of crudity and insult in your conversations; the ability to listen to correction; the ability to hear something about yourself without being offended; and, finally, the ability to keep your mouth shut and listen to others.

There are two issues here.  One, why have we become so violent and insulting in our relations with others?  And, two, what do we do about it?

No, Americans are not polarized by ideology: American Conservative – June 12

The conservative intelligentsia’s failed assault on Donald Trump during the GOP primaries was, in my view, the most interesting and perhaps the most important moment of the entire 2016 election cycle. Convinced that Trump threatened conservatism and the Republican Party, most of the notable figures of the conservative movement uniformly declared that Trump was not fit to be the Republican nominee. This struggle crested in an entire issue of National Review dedicated to denouncing Trump. (George Hawley (@georgehawleyUA) is an assistant professor of political science at the University of Alabama.)

Are you among those who often have trouble sleeping at night, even though they are tired of eight hours? … “Make sure the activities in the room just to rest and make out with her husband. Because, other activities in the room can manipulate the brain to be more difficult to rest,” said Kenneth Lichstein, Ph.D., Director of the Sleep Research Project at The University of Alabama, USA.

When the Green Bay Packers break for the summer after Thursday’s final day of mandatory minicamp, free safety Ha Ha Clinton-Dix will still be working – at his summer job.

On June 2, the former Alabama All-American started an unpaid internship with Brown County (Wisconsin) Circuit Court Judge Don Zuidmulder. He hopes to work with Zuidmulder for 180 hours this summer to earn six credits toward his undergraduate degree at the University of Alabama.

Clinton-Dix is a criminal-justice major and will lose his nickname while at work.

Joining me now is assistant professor of Political Science at The University of Alabama Dr. Allen Linken. What’s your initial take on Attorney General Sessions’ performance? Sure, I think the first really significant thing is that it was under oath. So, last week Director Comey testified under oath. There’s this feeling that somebody who swore an oath would tell the truth, the whole truth and nothing but the truth. Then it was a bunch of people telling a story that wasn’t under oath. So now you have sort of contestable stories under oath.

For the past 5 years, parched Californians suffered through the state’s worst drought. Wildfires, reduced crop production, environmental damage, cities running dry – all were part of the misery. But with the drought now broken by an unprecedented wet season and snow pack, it’s possible to look back and see the positives develop, especially when it comes to the state budget. (Ed’s Note: Jessica Duncan is a Capitol Weekly intern from the University of Alabama.)

Students Save Wood From Fallen Trees

William MacGavin has been woodworking since he was 11 years old. Over the years he’s salvaged wood from Christmas trees left on the curb, trees downed in storms or trees cut down by a city to make didgeridoos and other projects. So when he saw a construction crew taking down some oaks, pines and magnolias near North Lawn Hall while it was being constructed, he asked where they were taking the wood.  “They said ‘Oh we’re just hauling this off somewhere. It’s either going to be mulched or just probably taken to the dump to rot’ and that really bothered me,” MacGavin said.  “I’m a woodworker, so I was like ‘That is some quality logs right there and it be great if the University could recycle those.’”  MacGavin, who recently graduated from UA with a degree in architectural engineering, was also president of the Green Building Council. He and other members began brainstorming ideas about how to save the wood from trees that are taken down or fall down on campus.

“They didn’t infiltrate our system,” said Toni Pippins-Poole, the county’s elections administrator. “They couldn’t get in.”

If the hackers had been able to manipulate or delete the county’s registered voter database — which contains names, dates of birth and addresses for 1.3 million voters — that could have caused chaos on Election Day, said Dallas County Commissioner John Wiley Price.

What Christians should know about the alt-right: Ethics and Religious Liberty Commission – June 14

Earlier today, the Southern Baptist Convention adopted a resolution condemning the movement known as the “alt-right.”

The resolution initially caused confusion because many Baptists—like most other Americans—are not familiar with the movement. A majority of U.S. adults (54 percent) say they have heard “nothing at all” about the “alt-right” movement, and another 28 percent have heard only “a little” about it, according to a Pew Research Center survey taken last year.

The question on many Americans’ minds is what will be the final lie, the final scheme, the final egregious act that will prompt President Trump’s 37 percent base to accept the fact that Trump is deleterious to America?

Contrary to what some readers of my opinion columns may think, I am not rooting for a total and complete presidential fail because impeachment equals a President Mike Pence, who is equally horrifying.

Reaching into a sack, Sean Drummond pulled out a legless lizard at the Children’s Hands-On Museum on Thursday.

Stretched 3 feet long, the lizard is named Lieutenant Dan after a character from the 1994 movie “Forrest Gump” who loses his legs in the Vietnam War.

As Drummond held him, Lieutenant Dan begins to writhe.

“He’s not a big fan of being held,” Drummond said.

Drummond and other students from the University of Alabama went to the museum to show children about different types of reptiles and other animals that they study. During the visit, the students showed off a Burmese python, a box turtle, a speckled snake, a corn snake, a bearded dragon, a green tree frog, a tarantula and a hissing cockroach.

What is Munchausen by Proxy Syndrome, the disorder that fooled a community into thinking a girl was terminally ill?: Health.com – June 15

Since she was an infant, Gypsy Rose Blanchard had been diagnosed with a slew of diseases—including leukemia, muscular dystrophy, and epilepsy. At least that’s what her mother, Dee Dee, told friends and neighbors …

Approximately 600 new cases are uncovered every year. “While only 9-10% of these published cases lead to death, 25% of the siblings of these victims had also been diagnosed with the same illnesses and have died,” Marc Feldman, PhD, a clinical professor of psychiatry and adjunct professor of psychology at the University of Alabama in, Tuscaloosa, Alabama, tells Health. “So we conclude these siblings were mostly cases of Munchausen by proxy that weren’t recognized.”