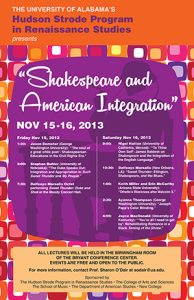 From the November 2013 Desktop News | “Shakespeare and American Integration,” a two-day symposium to be held November 15-16, will discuss integration in Shakespeare’s works. The event is part of “Through the Doors,” the yearlong series of events commemorating the 50th anniversary of desegregation at UA. Dr. Sharon O’Dair, director of the Hudson Strode Program in Renaissance Studies and a professor in the Department of English, envisioned the symposium first through a musical connection.

“I knew that trombonist Defeayo Marsalis had reimagined Duke Ellington’s ‘Such Sweet Thunder,’ a set of instrumentals released in 1957 and linked to particular Shakespearean works and characters,” she said. “I also knew that Ellington had released ‘My People,’ a celebration of African-American emancipation, which included the song many consider Ellington’s most serious political statement, ‘King Fit the Battle of Alabama,’ about Bull Connor’s dogs and fire hoses.”

She took those ideas and began to reach out to her colleagues in Shakespeare studies to see if anyone was working on these topics. The response was enthusiastic, she said. The two-day symposium has a full slate of eight speakers.

“How Shakespeare played during the years of the Civil Rights Movement is under explored,” O’Dair said. “I hope the symposium will be a catalyst for further work on this question.”

A highlight of the symposium will be a concert by Delfeayo Marsalis and Octet on Friday, Nov. 15 at 7:30 p.m. in the Concert Hall of the Moody Music building. Marsalis, a noted jazz trombonist, will perform his own arrangement of Duke Ellington’s “Such Sweet Thunder.” Visit uamusic.tix.com for information.

The symposium will take place in the Birmingham Room of the Bryant Conference Center on the UA campus. It is free and open to the public. The symposium is sponsored by the Hudson Strode Program in Renaissance Studies in the Department of English, the School of Music, the Department of American Studies, and New College.

For a full schedule of events, visit http://strode.english.ua.edu/lectures-and-symposia/.