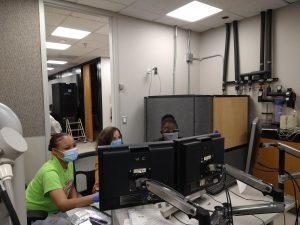 From the September 2021 Desktop News | Dr. Alberto Pérez-Huerta, a professor of geological sciences at The University of Alabama, hopes to change the way people think of geology’s role in the emergence of life on Earth. In July 2020, Pérez-Huerta received an EAGER grant from the National Science Foundation to help him not only make that happen, but to bring Stillman College students with him along the way.

Pérez-Huerta’s research focuses on the hypothesis that the biomolecules that eventually formed RNA, DNA, and life on Earth potentially survived the harsh environmental conditions of billions of years ago because of clay minerals, which could have trapped them between their layers and preserved them like cell membranes.

“The problem with that hypothesis is that these spaces are really tiny, so we cannot see if organic molecules could get there,” Pérez-Huerta said.

Pérez-Huerta’s project remedies that with a technique called atom probe tomography, or APT, in which he uses an instrument that allows him to see atoms and discover if molecules could become trapped inside the spaces. The state-of-the-art instrument, located in the Alabama Analytical Research Center (AARC), housed in the Tom Bevill Building on UA’s campus, is one of only two in the world, the other in Australia, that are being used for this kind of geological application. This makes the potential findings even more important.

“A better understanding of how life formed on this planet and the conditions that made it possible—that’s fundamental to understanding why we are here,” Pérez-Huerta said. “And in the future, it can help us tackle some of the challenges we face with environmental changes, or we can go to other planets and explore the possibility of life there.”

An equally important part of this project to Pérez-Huerta is the community-engaged teaching and learning component, for which he chose to form a partnership with Stillman College, a historically Black university in Tuscaloosa, to facilitate diversity in geological research.

“We don’t have a lot of diversity in our sciences,” Pérez-Huerta said. “A more diverse workplace and academic environment enriches everything we do. If we don’t have a diverse research community, we are missing out on a lot of human potential in terms of perspectives and ideas.”

He and associate researcher Dr. Chiara Cappelli work with two Stillman biology students, Ayana Green and Bridgett Pettway, who receive a stipend, research experience and a mentor in Pérez-Huerta. Because this particular project operates at the intersection of geology, chemistry, and biology, it exposes the students to research they might encounter in graduate school whether they pursue geology or not.

Pérez-Huerta’s ultimate goal is to establish a long-term collaboration with Stillman College where he can write proposals with the students and faculty to further diversify the research community.

“As a public state university, I think our community has to reflect the community we provide service to,” Pérez-Huerta said. “Both with students and faculty, we have to be a representation of the people we serve and show we care.”