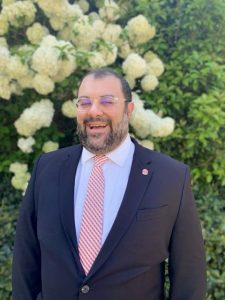 From the UA News Center | When Angel Narvaez-Lugo walks across the commencement stage on July 31 to receive his bachelor’s degree in religious studies, it will serve as a testament to how he’s overcome his challenging past, and as a gateway to a future of possibilities.

Born in San Juan, Puerto Rico, Narvaez-Lugo moved to Fort McClellan, Ala., in the seventh grade. After graduating high school in 1993, he went to Jacksonville State University where he excelled as a political science major, was active in his fraternity, and served as vice president of the Student Government Association.

But as he was completing his fourth year, a chain of tragic events occurred that led to his graduation being pushed back for 25 more years.

“I experienced the perfect storm of personal issues that started with an accidental outing by a close friend,” he said. “It coincided with my parents’ decision to move back to Puerto Rico.”

Wanting to be closer to family, he transferred to The University of Alabama where his sister was attending in 1997.

“But my head wasn’t in the right place,” he said. “My parents had left, I was a Puerto Rican in Alabama — there aren’t too many of us here — I identified as a gay male, I had to start over making friends, and most of my classes from Jax State didn’t have equivalencies here.”

Narvaez-Lugo bounced around to different majors, feeling lost until a friend asked him to take Intro to Native American Religions with her as an elective. He gave it a shot and fell in love with the class.

Having found purpose again, he pursued his new major with renewed focus, but his hardships had only just begun. His parents divorced and as a result, stopped helping him pay his rent. He became homeless.

“I couch-surfed and slept in my car for about 13 months. I ended up not finishing my courses that year in 2001.”

After finding steady employment, Narvaez-Lugo re-enrolled at UA full-time in 2007. But within a year, he was stricken with sudden, crippling neck and back pain. He was eventually diagnosed with three ruptured discs in his cervical spine, and because of his ongoing medical issues, he dropped out of school again.

A few years later, the April 27, 2011, EF4 tornado smashed its way through Tuscaloosa creating a great need for Spanish-speaking volunteers to help with relief efforts by interpreting for Hispanic families. Narvaez-Lugo volunteered, and from there, things began to look up.

His volunteerism led to an interpreting contract job for Tuscaloosa County DHR, which led to a job for the City of Tuscaloosa where he became the first bilingual telecommunications specialist for 311, a job he worked from 2013-2016. Though he was glad to be employed, his lack of a degree kept him from advancing.

Narvaez-Lugo became a program assistant at UA’s Moundville Archaeological Park — a job that took him full circle to the Intro to Native American Religions religious studies course he fell in love with.

He worked at Moundville for two years and took advantage of the educational benefits available to UA employees. He then joined UA’s Fraternity and Sorority Life as a program assistant, and soon after became the interim SGA advisor.

“Dr. Myron Pope saw value in me, and he’s been one of my biggest cheerleaders.”

Now in his fifth year as a UA employee, he’s become president of the Office, Clerical, & Technical Staff Assembly and founded the LatinX Faculty and Staff Association.

“It’s been a slow and steady journey and I couldn’t have done it without The University of Alabama’s fantastic employees. Though I used to be a little embarrassed about my lack of a degree, I hope now that my story’s out, students who find themselves in similar circumstances see that it can get better.”