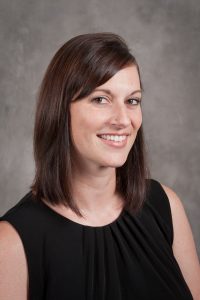 From the January 2021 Desktop News | Dr. Brittany Gilmer and students from her class on human trafficking are hoping to make a difference in their communities by raising awareness throughout Tuscaloosa about human trafficking.

Gilmer, an associate professor in the Department of Criminology and Criminal Justice, first became interested in and started studying the issue of trafficking through her research on Somali pirates. Because of her expertise in the area, Gilmer was asked to create and teach a class on human trafficking to undergraduate students at UA.

“Trafficking is the use of force, fraud, or coercion with the intent to exploit another human being,” Gilmer said. “I think a lot of misunderstanding stems from people thinking that human trafficking requires a human being to be unwillingly moved from one place to another, which is not the case. You can be trafficked without ever leaving your house.”

“Students hear rumors about trafficking in Tuscaloosa, and although trafficking is present in our community, it’s not there in the way you would expect it to be,” Gilmer said. “It’s not like the movie Taken, where a stranger comes and kidnaps a victim in the middle of the night. Instead, most of the local human trafficking is tied to connections established between the perpetrator and victim on social media platforms. It can involve a trafficker reaching out to a potential victim via Snapchat, Twitter, Facebook, OnlyFans, and SugarDaddy websites. We want to make sure that students understand that human trafficking is running rampant on those websites and they, too can become victims if they are not informed about the dangers.”

“In most cases, traffickers become familiarized with the women’s vulnerabilities and insecurities,” Gilmer said. “They manipulate the women into thinking that they [the traffickers] are the only ones who truly care for and understand them [the victims]. This is why the use of force, fraud, and coercion are central to trafficking. It’s a process of manipulation that can occur slowly or quickly and often involves some form of emotional and physical abuse counterbalanced by loving and caring behaviors. It creates a cycle of abuse and caring that not only draws women into these situations but also makes it hard for them to leave.”

The most popular visitors to Dr. Gilmer’s class are members of the West Alabama Human Trafficking Task Force. Lieutenant Darren Beam, the director of the Task Force, and officers from the Tuscaloosa Police Department, University of Alabama Police Department, and Northport Police Department speak to the class each semester about the role of law enforcement in stopping human trafficking, their experiences conducting local undercover trafficking stings, and discuss the various resources in the area for victims of trafficking.

“One of the reasons the Task Force is becoming a model, not only for Alabama, but also throughout the region and the nation, is their strong partnership with other levels of law enforcement, NGO’s and community organizations who prioritize taking a victim-centered approached to combating trafficking,” Gilmer said. “So it’s not just about policing—the law and order side. It’s also about making victim services and outreach central to the process and providing rehabilitation options to those impacted by human trafficking.”

Now, Gilmer’s goal is to speak to students outside of her classes. One student invited Gilmer and members of the Task Force to speak to her sorority, Tri Delta, during a Zoom meeting last fall. From there, they were invited to speak to the broader UA Panhellenic Organization. Gilmer hopes to speak to other on-campus organizations, such as fraternities, in the near future.

In addition, students from her class just received approval for a new UA student organization, Tide Against Trafficking, that Gilmer will advise. She says the goal of the student-led organization is to increase awareness among the UA student population and local community about the signs of sex trafficking and labor trafficking as well as to dispel myths. The students hope to create partnerships with student groups at other universities to create a nation-wide student-led awareness effort.

For more information about human trafficking or to get involved with raising awareness, contact Dr. Brittany Gilmer. To learn more about becoming involved in the UA student group, Tide Against Trafficking, contact tideagainsttrafficking@gmail.com.