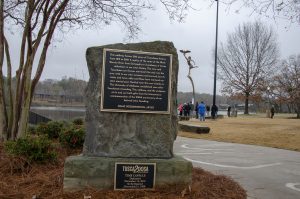 Around 200 people attended a ceremony Dec. 13 at the UA Boathouse at Manderson Landing. There, UA President Stuart R. Bell presented several gifts to Tuscaloosa Mayor Walt Maddox and the citizens of the Druid City on behalf of the University on the city’s 200th birthday.

A sculpture depicting Minerva, the Roman goddess of wisdom and strategy; timeline of monumental dates in the city’s history; and time capsule were unveiled at their new home at the Park at Manderson Landing.

Minerva is depicted in the UA seal. The sculpture stands 30 feet tall and weighs more than 9,500 pounds. O’Connor produced the model in his downtown Tuscaloosa studio, and the full-scale sculpture was cast in Italy.

Wedderspoon, a UA professor of sculpture, led the design and production of the bicentennial timeline that runs 110 feet along Manderson Landing and leads to the Minerva sculpture. The timeline depicts the Black Warrior River with historic dates in the city’s history etched in the concrete.

In addition, a time capsule with selected items that represent everyday life in 2019 was buried at Manderson Landing. The time capsule’s content represents 12 themes, which include arts and entertainment; sports and athletics; infrastructure; education; and civil rights and diversity. The capsule will remain sealed until Tuscaloosa’s 250th birthday in 2069.

Watch a video about the bicentennial gifts on the UA News site.