The yearlong celebration of Tuscaloosa’s bicentennial will culminate with the unveiling of three landmarks celebrating the city’s past, present and future on Tuscaloosa’s 200th birthday.

A sculpture depicting Minerva, the Roman goddess of wisdom and strategy; timeline of monumental dates in the city’s history; and time capsule will be dedicated during a ceremony at 10 a.m. Dec. 13 at the Park at Manderson Landing.

O’Connor’s piece features a sculpture of Minerva, who is depicted in the UA seal. The piece will stand 30 feet tall and weigh more than 9,500 pounds. O’Connor produced the model in his downtown Tuscaloosa studio and the full-scale sculpture was cast in Italy.

“I hope each viewer will have a unique experience and see the sculpture as a symbol of progress through reflection, not only of our past but present and what we can do in the future,” said O’Connor. “The base of the sculpture is reflective so people can see themselves in the piece.” 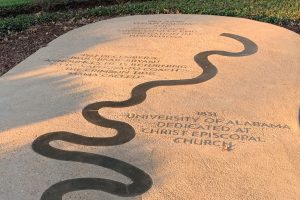 Wedderspoon led the design and production of the bicentennial timeline that will run 110 feet along Manderson Landing and lead to the Minerva sculpture. The timeline depicts the Black Warrior River with historic dates in the city’s history etched in the concrete.

“Everything came down to the river for me because we wouldn’t be here if it wasn’t for the river,” said Wedderspoon, UA professor of sculpture.  “When you look back at Tuscaloosa’s history, early settlers followed Native American trails that led to this area because it’s where you could cross the river. The Black Warrior River has also played a tremendous role in transportation and the economy.”

Learn more about the unveiling by reading the full article on the UA News site.