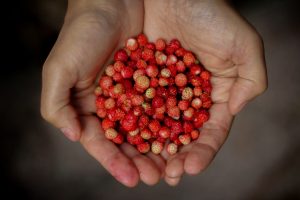 Believe it or not, food isn’t only found on grocery store shelves and farms.

It’s all around, even in the average backyard.

In Alabama, there are numerous types of edible plants and fungi growing wild.

Dr. Michael R. McKain, assistant professor of biological sciences and curator of The University of Alabama Herbarium, said Alabama is one of the most biodiverse states in the nation, and with that comes a plethora of wild eats.

Historically, ancient people discovered what was edible by trial and stomach-churning error.

“Our knowledge of what we can eat is based on thousands of years of people doing just that,” McKain said. “When people were hungry, they tried different things and found out what was edible. People have been smart enough to know to try a little bit of something rather than a lot. There’s not a lot of things that can kill you straight up by taking a nibble, it just may make you really sick.”

Today, wild foraging is growing again in popularity. But with that come words of precaution. If anyone intends to engage in legal wild foraging, there are some rules to follow to keep safe.

“Never ever eat anything that you’re not 100 percent sure you know what it is,” McKain said. “One of the best ways to learn is to go out with people who know which plants are safe to eat.

“Also, be mindful and respectful of the property you’re on. Are you allowed to forage on that property?

McKain also cautions people to be mindful of where plants are growing. If it’s a location that gets sprayed a lot by pesticides or weed killers or is growing on the side of the road where car exhaust hits it, wild edibles in that area should be avoided.

For a list of wild items often consumed in Alabama, read the full article on the UA news site.