From the October 2018 Desktop News | “Historians come cheap,” said Dr. Lisa Dorr, associate dean of social sciences in the College of Arts and Sciences. “Really all we need is a little bit of money and a lot of time to be successful.” 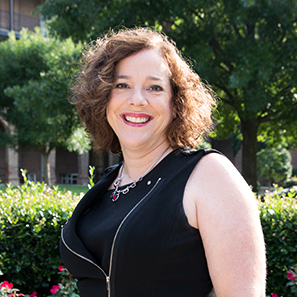 In fact, using the $9,000 she received from the College’s Leadership Board faculty fellowship, Dorr was able travel to three National Archives to do the entirety of her research for her book A Thousand Thirsty Beaches: Bootlegging, Smuggling, and the South during Prohibition, which was recently published by the University of North Carolina Press.

But after a visit to Havana, Cuba, in 2006, Dorr learned that a great deal of the liquor that came into the United States during Prohibition was smuggled into the South from Cuba, and she wanted to, for the first time, tell the story of Southern Prohibition.

“Unlike in the North, Prohibition in the South isn’t a story of organized crime and violence,” Dorr said. “There was so much opportunity for smuggling in the South, and there was such a wide-open market for it. Hundreds of small groups were doing it.”

Rum running in the South wasn’t done by gangsters and mobsters; it was done by fishermen or wealthy yachtsmen—essentially anyone who wanted to pick up extra money at night and owned a boat. Additionally, because the market for alcohol was pervasive, people could buy it anywhere—from their hotel to their mechanic’s garage.

But Cuba didn’t just help to smuggle alcohol; it smuggled people too.

“About the same time Prohibition was passed, the United States began to crack down on immigration,” Dorr said. “They wanted to restrict immigrants because they were concerned, very much like today, that the wrong people were coming in.

“They thought ‘These people aren’t like us. They can’t assimilate. They don’t have our values.’ But one of the surprising things I’ve discovered is that when the immigration door was shut (and the nation instituted a quota system so only a certain number of immigrants could come in from any one country), people who missed the quota cut would go to Havana, and they would pay to be smuggled into the United States aboard a rum runner.”

Immigration smuggling was so pervasive during Prohibition that passenger liners and steam ships in Europe would even advertise that travelers who couldn’t get into the United States through their services should go to Cuba and try there.

Prior to Dorr’s research, the history of Cuba’s involvement in Prohibition was largely untold.

“Often my students think that historians just memorize these stories, but historians create these stories,” Dorr said. “We find the pieces and try to put them together. Students don’t realize that the fun part is trying to figure out why something happened the way it did.”