The University of Alabama is about to raise the curtain on a theater program to help treat autism. The $1 million grant, from the National Institute of Mental Health will fund SENSE, a theatre learning experience for 10-16 year-olds with autism.

When hundreds of neo-Nazis and white supremacists rallied a year ago in Charlottesville, Virginia, the demonstration turned into a riot that left one woman dead and shocked the nation … “I think the hope was that they would step away from their computers and enter into real politics,” said George Hawley, a University of Alabama professor who has written a book about the alt-right. “And that was not the result.”

Sayler Tatom cares about Big Sky, which means she cares about snow, plants and the environment. Originally from Dallas, Tatom moved to Big Sky at about 10 years of age and graduated from Lone Peak High School in 2017 … While Tatom is currently enrolled in the environmental engineering and dance programs at The University of Alabama and will begin her sophomore year this August, she returned to Big Sky this summer in order to help the community reduce its environmental profile.

It’s called Momo, and it’s found here in the What’sApp. And if you see it on your child’s phone, you need to talk to them about this game. Once your child signs on, they are encouraged to add contacts associate with the game. The controller sends violent pictures to your child, and claims they know personal information about them, and they use that to threaten them to perform challenges, even videotaping themselves committing suicide. (Interview with Dr. John Lochman of UA) 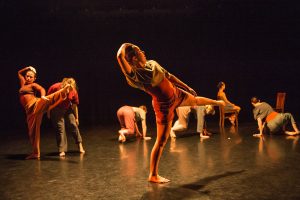 I was curious about IRL. A dance piece billed as a ‘thought-provoking performance about navigating life in an increasingly intrusive and connected world’. It could have gone either way. But the young @YonderDanceCo from Alabama managed to find the sweet spot between interactivity, playfulness and profundity.

Divorced losers are the people who are most likely to become white nationalists: Raw Story – Aug. 8

What are the traits that make someone the most likely to become a white nationalist? According to a new study from the Institute for Family Studies, two traits in particular are most likely to make white nationalism appealing to white men: They have low incomes and they have been divorced … George Hawley, a professor of political science at The University of Alabama, theorizes that the feelings of powerlessness that engulf unemployed men who are going through a divorce make them uniquely vulnerable to white nationalist messages that give them an easy scapegoat to blame for their problems.

“In God We Trust”

Alabama pushes to bring God back into public schools, from ‘In God We Trust’ to Ten Commandments: Al.com – Aug. 9

One month after Alabama allowed “In God We Trust” displays on public property, the Blount County school board is poised to become the first system to act … “I think these bills are the beginning of a broader strategy to use religious freedom to maintain Christian power in the public sphere,” said Michael Altman, a religious studies professor at The University of Alabama.

The University is also set to recognize nearly two-dozen of its female trailblazers. It’s part of Alabama’s 125 years of women and the 1893 Jubilee Dinner. Among those the school is recognizing, late Alabama author Harper Lee.