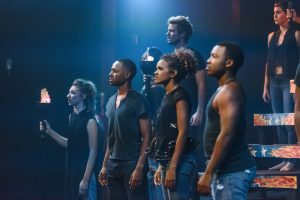 The NOA is an organization that promotes excellence in opera education and pedagogy through its support of a diverse community of opera educators and professionals, according to its website.

Dr. Paul Houghtaling, an associate professor of voice and director of opera at UA, said the award serves as great validation for the original production that operatically tells the tale of UA’s destruction by the Union Army at the end of the American Civil War in 1865.

“It’s always a risk to do it, but this was a world premiere, and it’s a very timely piece, wrapping around race relations and the Civil War,” he said. “It’s a great accomplishment for the entire team. Our students did a great job.

“The UA Opera Theatre has enjoyed success in NOA’s Collegiate Opera Scenes Competition in the past, but this was the first entry and the first win in the production competition.”

Dr. Robin Behn, a professor of English and the production’s librettist – a scriptwriter for an opera, said she’s thrilled about the opera being recognized nationally.

“The story told through ‘Freedom and Fire! A Civil War Story’ is really many stories in one — that of the very young, hungry UA student cadets, of an escaped slave who has become a Union scout, of UA’s President Garland who leads the cadets into battle and then retreats, of Mrs. Garland who keeps the mansion from being burned to the ground, and of her slave who toils in that same mansion,” she said.

“Opera is the perfect medium to convey the intensity and complexity of these decisive days. I’m humbled that the opera has received this national attention: proof that our local story resonates far and wide, that its themes resound today.”

Houghtaling, who is the president of the National Opera Association, said they entered the competition in June, and blind judges selected the best productions. More than 50 productions from collegiate opera programs across the nation were entered into the competition’s six divisions. “Freedom and Fire! A Civil War Story” placed second in division I.

The “Freedom and Fire! A Civil War Story” team, which also includes Dr. Amir Zaheri, who created an original composition for the production, received a certificate for the win at the National Opera Association’s annual national convention in New Orleans Jan. 3-7.