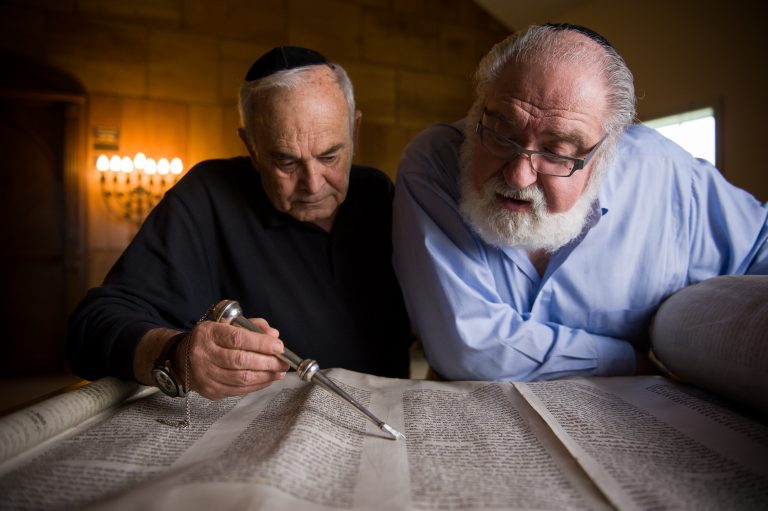 When a Torah scroll salvaged from the Holocaust came to the Temple Emanu-El, located just west of the Frank Moody Music Building, Drs. Paul Aharon and Steven Jacobs—both UA professors and members of the local Jewish congregation—wanted to know more about the scroll and when it was created.

With the permission of the Westminster Synagogue in London, which had permanently loaned the Torah to the Tuscaloosa temple, their congregation decided to have the scroll radiocarbon-dated. Aharon, a professor in the Department of Geological Sciences, spearheaded the project.

“This exercise of dating the scroll would not have been possible 20 years ago,” Aharon said. “Twenty years ago you needed about 300 grams of material in order to do a proper date. We only used 10 milligrams.”

Aharon and Jacobs, careful not to contaminate the samples or to take any more parchment than necessary from the scroll, snipped two small samples from the beginning and the end of the scroll in order to compare the samples and confirm that they were from the same period.

“Nobody had ever done this before at Westminster,” Jacobs said. “And the nice thing is that we guessed wrong on the dates—way wrong.”

Having looked at plenty of old scrolls, Jacobs, a professor in the Department of Religious Studies, had guessed the scroll originated in the mid- to late-1800s at the earliest, but when the radiocarbon tests
came back, they conclusively revealed that the scroll wasn’t 250 years old; it was approximately 750 years old—making it the second-oldest, Ancient Artifact complete Torah scroll on record.

“When Paul came back with the results, we were in shock,” Jacobs said. “But we, in Tuscaloosa, feel deeply honored to house this scroll.”