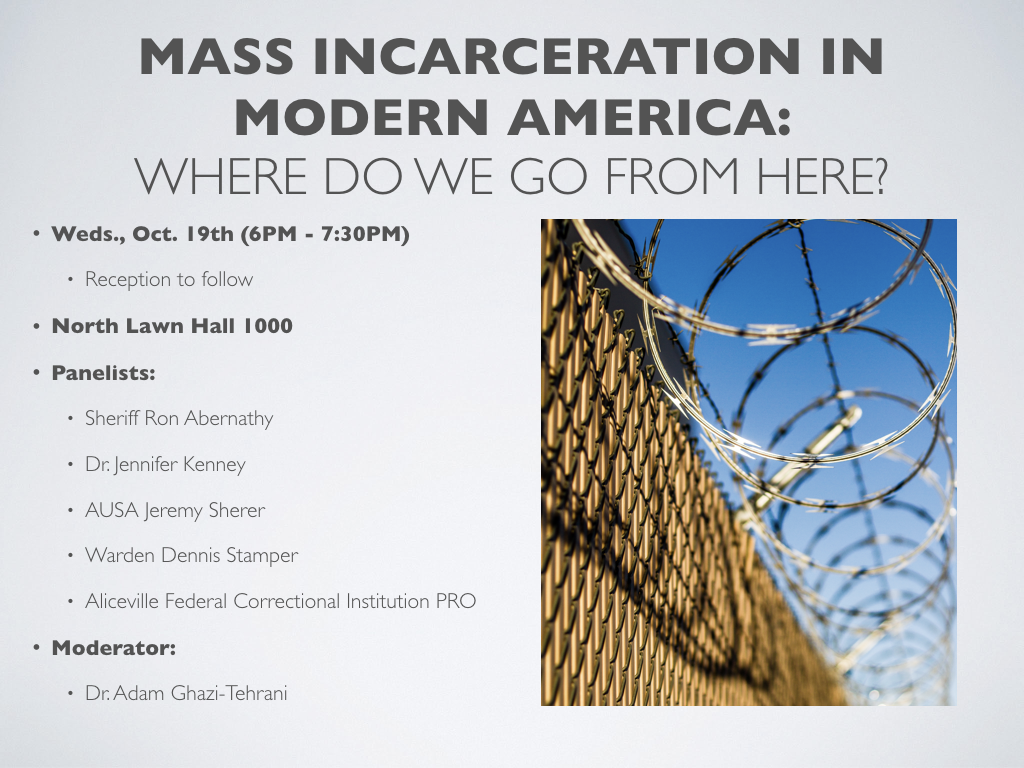 This year’s criminal justice community forum “Mass Incarceration in Modern America: Where Do We Go From Here?” will include a panel of experts with the prison system to discuss mass incarceration on Oct. 19 from 6 to 7:30 p.m. in Room 1000 at North Lawn Hall.

In response to President Barack Obama’s announcement that the government will end private prisons and the fact that the U.S. has the highest number of prisoners in the world, the criminal justice department is putting on the forum, “Mass Incarceration in Modern America: Where do we go from here?”

Adam Ghazi-Tehrani, a criminal justice assistant professor at the University of Alabama, will be moderating the panel of five specialists. He said they wanted to offer a chance for the public to learn about different issues in the prison system and pose questions to members in the justice system.

“This was a way of basically getting face-to-face from justice professionals with the audience,” Ghazi-Tehrani said. “This offers people a unique situation where they’re not in a court, they’re not in a prison or something to talk to the people that have these answers on bigger issues.”

The community forum was developed two years ago after the Ferguson shootings and has since been held annually to address current event issues. Last year, the forum discussed cyber crimes. Ghazi-Tehrani said the department wanted to give the public a way to get information from justice professionals on an emotional topic.

“By taking questions from the audience, we can answer whatever questions, fears and concerns people have,” Ghazi-Tehrani said. “I think there’s a lot of—not misinformation, but you always hear about prisons and the justice system in the abstract, so I think it’s putting a face on it and seeing that these people are the ones who are working it everyday and having students ask questions in a non-confrontational setting.”

Topics during the panel will include prisoner mental health, drug addiction and drug courts, prison privatization, and mass incarceration. Ghazi-Tehrani said the U.S. has unique issues from its high incarceration levels including impacts not only within prisons, but outside on families and communities.

If each American state was its own country, Alabama would rank fifth in the world for its incarceration rates according to a study by Prison Policy Initiative. Only the District of Columbia, Louisiana, Georgia, and Oklahoma outrank Alabama, which outranks any country around the world. The U.S. as a whole has an incarceration rate of 693 per 100,000 people. The United Kingdom has 145 per 100,000 population according to the Prison Policy Initiative.

“The U.S. is in front of countries with dictatorships and authoritarian regimes,” Ghazi-Tehrani said.

He said he hopes to ask the panel why they believe the U.S.’s incarceration rates are so much higher than other countries and foster discussion on different approaches to the solution and problem.

“There’s no animosity or stress in this situation,” Ghazi-Tehrani said. “I hope students go and have an illuminating experience.”