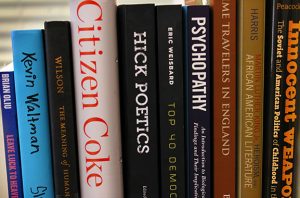 The heroes in African American life and literature don’t necessarily have to be moral or immoral, good or bad, so long as they work toward the good of the community. English professor Dr. Trudier Harris asserts that Martin Luther King Jr. fits within this heroic tradition, as a flawed man who ultimately worked for the betterment of humanity. Harris traces the literary history of King’s depictions from the early days in the 1950s to the 21st century.

“I firmly believe that video games are the new fairy tales — universal stories that we all remember,” said Brian Oliu, who teaches in the English department. His book reflects this, showcasing dozens of lyric essays with titles taken from classic Nintendo games. Even the book’s title, Leave Luck to Heaven, is the direct translation of the video game company’s title. A mixture of memoir and poetry, the essays memorialize the 8-bit games of the author’s youth. Super Mario Bros., Metroid, and Tetris do double duty here, both as video games and as something more, a signifier of how what seems to be only a children’s pastime can later in life become a great influence.

The second book in a four-part young adult series, Slump follows Derrick Bowen’s growing high school basketball career in Indianapolis and the problems D-Bow faces in his personal life and on the court. Not only about sports, Slump goes beyond the typical Indiana basketball story and incorporates issues of race and class. By placing the typically white and rural story in an urban and largely-African American setting, Kevin Waltman, an English instructor, engages with a contemporary audience in a changing world. The novel’s sequel, Pull, will be released in late 2015.

During the Cold War, children were used to advertise everything from cigarettes and gas masks to the Cold War itself. On both sides of the Iron Curtain, says history professor Margaret Peacock, each superpower indicted the other with images of starving and suffering children, a symmetry that occurred despite their bitter ideological divide. Harnessing information from 16 archives and three countries, Peacock paints a story of the Cold War that differs greatly from the usual analysis of military might and political will. She explores the experience of both the United States and the Soviet Union in this war of propaganda and public relations.

The Force of Beauty: Transforming French Ideas of Femininity in the Third Republic, by Holly Grout

In the French Third Republic, the notion of beauty as something to be attained rather than something that one is born with first came about with the rapid rise of the cosmetics industry. Dr. Holly Grout, a scholar of modern France and its history, explores how this idea informed the modern interpretation of femininity and how the media and culture of the times convinced French women of the strength of their position in society. The period, 1870-1940, encapsulated a tumultuous time for women in France. In contemporary popular culture, cosmetics advertisements, print media and later movies all glamorized commercial ideas of female beauty, changing the relationship between women and their sexuality.

A broad and multifaceted genre, pop music comprises a variety of formats: oldies, Top 40, classic rock, country, and urban contemporary among them. But these formats aren’t organic; they were created by radio stations as a way to divide up music into portions palatable to various segments of the population. Many critics condemn this segmentation of pop radio, but American studies professor Eric Weisbard writes that people often find a reflection of their own perspectives within their format of music. With chapters on the life and influence of such celebrities as Dolly Parton, Elton John and more, Top 40 Democracy makes a powerful argument for pop music and its ability to empower people from all walks of life through its expression of their unique struggles.

Citizen Coke: The Making of Coca-Cola Capitalism, by Bartow Elmore

Big business in the American South always seems to have its innocent casualties, and Coca-Cola is no exception. Elmore, a history professor, investigates the ecological and economic sustainability of Coke, from its original strategy of offloading risk onto suppliers, franchises and the government, to its current global dominance. The massive quantities of sugar, coca leaves, caffeine and water that the company consumes can be disruptive to society at large; stockholders demand gains each and every year. In a world of finite resources, can this continue in the 21st century? Elmore works to find answers to this question in this exploration of a soft drink giant and its own definition of capitalism.

Psychopathy: An Introduction to Biological Findings & Their Implications, by Andrea Glenn

The study of psychopathy — a personality disorder characterized by a lack of empathy, antisocial behavior and impulsiveness — is a rapidly growing field, and at its forefront is this new book on the biological underpinnings of the disorder and the ethical ramifications of this research. If evidence suggests that a person is a psychopath and that biological factors influenced their criminal actions, can they be held responsible for these actions? This is one of the many ethical questions addressed by Glenn, a psychology professor, in this exploration of psychopathy and its effects.

“It’s a project built to consider class, authenticity, place — and it’s a book built to reclaim hick, a once proud word now turned pejorative,” English instructor Abraham Smith said of his new book, Hick Poetics. The countryside is the setting of many classic, celebrated poems, and this anthology of contemporary rural American poetry further explores how place and people are in conversation. The poetry of those who live off the beaten path has not been particularly publicized in modern anthologies; all the more reason to bring them to light according to Smith and his co-editor, Shelly Taylor. Smith offered this simple, final question: “Do we write the land or does the land write us?”

Time Travelers in England: Americans in Search of Salt, by Ian Brown

Tracing the rivers and canals of England on which salt once traveled, Dr. Ian Brown and Trevor Hughes seek to find the ancient roots of the mineral. Brown, an anthropologist, steers them through the English countryside by way of monuments and historic sites such as Stonehenge, Avebury, and a selection of storied castles. In contrast with Brown’s previous salt-centered book, The Red Hills of Essex: Studying Salt in England, this is a far more waterlogged adventure. The mode of travel is commonly a narrowboat, a good match for the equally narrow canals, according to Brown. “Salt was transported along the canals, the same canals that carried the coal that fueled the Industrial Revolution,” Brown said. “So, with this in mind, what better way to travel to Middlewich, Nantwich and Northwich than to get in a narrowboat and take the plunge, both literally and figuratively?”

The Meaning of Human Existence, by Edward O. Wilson

A new book by one of The University of Alabama’s most famous alumni, The Meaning of Human Existence is an exploration of Wilson’s thoughts on the purpose and trajectory of humanity. He grounds his argument in the origin of humanity, biological evolution. This evolution and its legacy, he says, are the cause of a great many of the issues that plague humanity today: booming population, racism, and religious in-fighting, among others. The pressure our long-ago ancestors faced to sort themselves into insular groups, hostile against all others, is reflected in our contemporary issues with pointless racism and sectarianism. Wilson, recipient of two Pulitzer Prizes and the world’s foremost authority on ants, grapples with how humans might go about turning back the tide of our irrational tendencies and move forward.