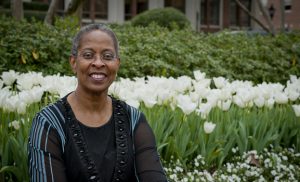 From the May 2013 Desktop News |  Women writers from each state are being showcased in a project by the American Women Writers National Museum. Dr. Trudier Harris, a professor in the Department of English, will represent Alabama and give a presentation this month in Washington, D.C. at the National Press Club as part of that project.

Her talk, entitled, “Bama Bones: A Black Southerner Talks Place & Creativity,” focuses on how living and growing up in Alabama influenced her scholarly and creative works. Harris will revisit topics from her memoir, Summer Snow: Reflections from a Black Daughter of the South.

The idea for her talk came from a line in Langston Hughes’ memorable poem “One-Way Ticket,” which says, “I pick up my life/ And take it with me.” The line resonated with Harris, she said, because as she has traveled all over the world and worked on numerous projects, she has always felt the connection with her home state and the influence of her upbringing in the South. “Everywhere I go, Alabama is always in my bones,” she said.

The American Women Writers National Museum, was founded in 2012 to honor and showcase the premier historical and contemporary women writers in the United States. In its first year of operation, the museum hosted more than 20 programs featuring prominent writers who represent a wide variety of literary topics.