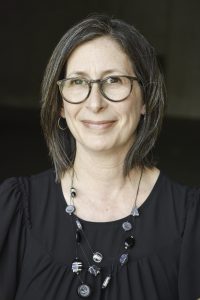 From the February 2021 Desktop News | Dance is one of the most challenging art forms to teach because there is no widely-used form of notation, no scripts to read or music to transcribe. Instead, dance technique and choreography are most often passed down orally, from teacher to student, making it difficult to share with those outside this chain.

While the invention of film, then video, and now digital recording has created an alternative means of sharing dance, public access to dance recordings is limited, and it can be difficult for educators, scholars, or audience members to find exactly what they are looking for. Rebecca Salzer, an associate professor of dance at UA, directs the Dancing Digital project, which is working to improve access to recorded dance by creating a new digital resource that goes beyond the dance excerpts and trailers currently available online.

Funded by a nearly $100,000, two-year National Endowment for the Humanities grant, Salzer is collaborating with University of Texas at Austin dance professor Gesel R. Mason and Alabama Digital Humanities Center director Dr. Anne Ladyem McDivitt to create an online archive based on Mason’s collection of recordings titled No Boundaries: Dancing the Visions of Contemporary Black Choreographers. The digital archive will be constructed using the open-source software CollectiveAccess, and will serve as a prototype for future dance archives.

Salzer’s interest in this subject comes from more than two decades as a dance-film-maker, as well as her experience as an educator, trying to share dance work with students living in parts of the country where access to live dance performance is limited.

“Making dance for the camera has been my primary creative research,” Salzer said. “When I became an educator, I realized it was almost impossible to find recordings of anything I wanted to share or teach or show or study.”

The archive will feature a small collection of recordings collected by Mason to document the rehearsal and performance of solos by ten Black contemporary choreographers spanning 70 years of work. Salzer says it is the ideal collection with which to construct a digital archive prototype.

“Professor Mason at UT Austin was very ahead of her time in thinking about dance legacy in recorded form, and so she has this group of recordings that’s quite a beautifully curated and small collection, which works well for what we’re trying to do,” Salzer said. “The archive will also celebrate and bring attention to this often under-recognized group of artists.”

This is Salzer’s second NEH grant for Dancing Digital. The first, a planning grant, funded a symposium that occurred in May 2019, where dance researchers from across the nation gathered to discuss the best methods to make dance more accessible, diverse, and searchable for scholars, educators, and audiences. From this symposium, as well as feedback gathered by the Dancing Digital team at national conferences, it became clear that creating an archive was the next step.

One of the biggest hurdles to making full recordings of dance broadly available has been intellectual property concerns. “Intellectual property in dance is very complex,” Salzer said. “If you look at a recorded dance performance, the copyright holders could include the choreographer, the music composer, the music performers, the designers of lights, costumes, and sets, and even the stage manager and crew.”

One goal of building an online prototype archive is to explore, with the help of legal experts, how direct licensing applied in combination with the fair use doctrine of the Copyright Act can facilitate the sharing of national culture.

Salzer is also hoping to secure more funding to sustain the resource over time, as well as to expand and improve the archive in response to user feedback.