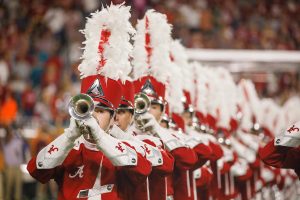 The University of Alabama Million Dollar Band has been selected to perform in the 2020 Macy’s Thanksgiving Day Parade®, representing the state of Alabama.

This will mark the first appearance by the band in the Parade. The Million Dollar Band will join the Parade to the call of “Let’s Have a Parade,” the iconic phrase that has signaled the start of every Macy’s Thanksgiving Day Parade since 1924.

“It’s fitting that the UA Million Dollar Band, one of the most respected university marching bands in the country, will be performing in one of the largest parades in the world,” said UA President Stuart R. Bell. “What Alabama fans have been able to enjoy on Saturdays will now be shared with more than 50 million people live on the streets of New York and watching on television. We’re honored by the invitation, and I couldn’t be more pleased by the work of these talented student musicians.”

“The Macy’s Thanksgiving Day Parade is one of America’s iconic holiday traditions,” said Dr. Ken Ozzello, UA professor of music and director of bands. “Having the opportunity to participate will be thrilling for the members of the Million Dollar Band and provide them with life-long memories.”

Each year, the Macy’s Parade Band Committee looks for bands that have the stage presence and the musical and marching abilities to captivate more than 3.5 million live spectators and more than 50 million viewers. The Million Dollar Band was selected from more than 100 applicants as one of nine bands to march in the 94th edition of the annual holiday spectacle.

The Million Dollar Band will spend the next 14 months planning for their Parade appearance.

“In preparation, the band will work on its marching technique, as well as the standstill portion of the Parade which is televised by NBC,” Ozzello said. “It will be a challenge to stage 400 musicians and performers in front of Macy’s, but the staff is eagerly looking forward to taking on that challenge.”

Learn more about the parade appearance by reading the full article on the UA News site.