From the August 2021 Desktop News | Dr. Andrew Raffo Dewar, a professor of interdisciplinary arts in New College and the School of Music, was recently awarded two different Fulbright positions in one year: one as a Fulbright specialist in Bogotá, Colombia, and the other as a Fulbright Canada Research Chair in Toronto, Canada.

Dewar, whose work as a composer, performer, and ethnomusicologist has allowed him to create and study the intersections of art, music and culture, will work in both locations to foster relationships between American and international scholars while sharing his expertise with each institution’s communities.

In June, Dewar traveled to Bogotá, where he worked with scholars at Universidad Antonio Nariño to develop an undergraduate curriculum in ethnomusicology, and gave public talks on experimental music and intermedia arts.

Dewar also worked with Professor Rodrigo Diaz to record sounds throughout the city, in the countryside, and at famous landmarks, such as the Salt Cathedral of Zipaquirá on the outskirts of Bogotá. These sounds will be assembled into an electronic music composition that combines different spaces and different periods of time though a process known as convolution, which interweaves two sounds together, transforming each sound with the characteristics of the other.

“The idea is that we’re going to work with these different field recordings we made and put them into different spaces,” Dewar said. “For example, I’m going to use the process of convolution to combine the sounds of 1500-year-old bells from a museum with the sounds of modern-day ice cream cart bells we passed on a walk in the city to create a kind of pan-temporal bell sound that is a combination of both past and present. I might also take sounds we recorded at the top of a mountain and place them in the reverberant underground caverns of the salt cathedral.”

Dewar says one of the reasons he was interested in York University is because of its expansive Distributed Performance and Sensorial Immersion, or Dispersion Lab. The lab allows faculty and students to do research-creation work in digitally-mediated performance, electroacoustic and computer music, sonic arts, improvisation and computational creativity.

“It’s basically an experimental intermedia arts incubator,” Dewar said. “They have amazing technological tools, like multichannel 3D spatial audio. They even have loudspeakers built into a haptic floor, so that you can send sounds through the floor to create vibrations, which is unique to the Dispersion Lab. And they have projectors and screens for video or other media.” 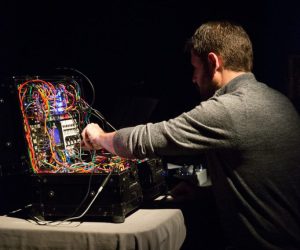 For Dewar, these resources are a huge benefit as he works to expand his experimental opera, Volver, which was awarded the 2019 Robert M. Stevenson Prize from the Society for Ethnomusicology. Volver explores the experiences of Mexican-Americans who were repatriated to Mexico in the 1930s, as told through oral history recordings collected by historian Dr. Christine Valenciana in the 1970s when she was a student. The recordings were made available to Dr. Dewar by the Lawrence de Graaf Center for Oral and Public History at California State University, Fullerton. The opera interweaves these testimonies into an imaginary conversation that functions as the libretto, with the rhythms and sounds of the interviewee’s voices driving the electronic sounds that accompany them. The audience views these experiences as though they are time travelers with the help of projected archival images that are dynamically altered by the music. Throughout his time in Toronto, Dewar hopes to expand this piece from its current 15 minutes so that the audience has more time to absorb the information, while also developing different iterations of the piece for different spaces.

“I’m planning on making the piece modular, which is to say that there will be different versions of the work depending on the resources of where it’s being presented,” Dewar said. “For example, a web version would use spatial audio through headphones, so that the sounds will be moving around your head. I’m also planning to add generative video, which morphs and changes based on the sound. I’ll also add archival images that are connected to the story of these Mexican Americans who were repatriated to Mexico. Essentially, there’ll be a web version, a gallery or museum installation version, and a live performance version with electronics, live video manipulation, and live acoustic instruments.”

Although these two Fulbright experiences will be very different, Dewar says he is ecstatic to receive both in the span of a year. For him, this is not only satisfying in his career, but a sign that his work is being recognized and appreciated.

“Getting both of these awards is an honor,” Dewar said. “It makes me feel like, perhaps, I’m onto something, and I have the freedom and support to explore these new ideas and approaches.”