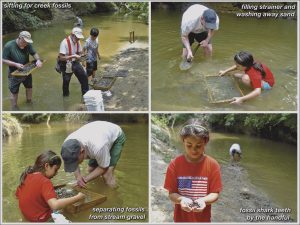 From the UA News Center | The landlocked Alabama Black Belt isn’t where someone would expect to find fossilized shark teeth, but that’s where Alabama Museum of Natural History shark hunters are leading the state’s only day-long, public, fossil excursions from July 10 to Aug. 6.

But what are ancient shark teeth doing in central and west Alabama?

Dr. John Friel, director of the Alabama Museum of Natural History, said hunts for the fossilized teeth of extinct shark species are possible because this part of Alabama was underwater during the Cretaceous Period when global sea levels reached their highest point in the entire geological record — more than 850 feet above present-day levels.

Friel said sharks produce thousands of teeth in their lifetime so he guarantees that those who join the hunt will find their fair share of sometimes broken, but at other times pristine “so sharp you could cut your finger on them” shark teeth.

The most common species of extinct shark teeth found on the expeditions are from goblin, crow and mackerel sharks. There are more than 20 different species of ancient sharks found in Creataceous deposits in this part of Alabama.

“We’ve been leading these hunts for years and they tend to be our most popular summer trips,” Friel said. “We take people to two sites — one in Hale County and the other in Greene County. We walk in stream beds and look for exposed gravel bars. We provide participants with small shovels and they use a sieve – a wooden frame box with wire mesh — to sift the sand and gravel to search for fossils.”

Paleontologists will accompany the expedition crews to identify what people find.

Friel said people get to keep what they find except in rare cases where something exceedingly valuable for research purposes is discovered.

“The University will keep those finds, but we’ll give credit to persons finding them,” he said. “An example of this was one summer a kid found an elasmosaurus neck. We kept that and added it to our museum collection.”

Attendees need to bring their own food, sunscreen, bug repellant and dress like they’re going swimming. They’re also advised to wear footwear due to broken glass at the bottom of the stream beds.

“There’s so much we’re still learning about sharks. We recently discovered that whale sharks have scales on their eyes and we don’t know why. Alabama currently has 16 species of sharks, but there are new species of sharks being discovered all the time so who knows what we’ll find. We welcome people to join us.”

Read the full original article on the UA News Center.