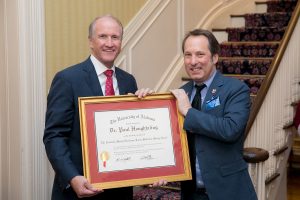 Dr. Paul Houghtaling, coordinator of voice and director of opera at The University of Alabama, has received the 2019 Blackmon-Moody Outstanding Professor Award.

“Paul is widely recognized as one of the most successful, innovative and respected opera directors and educators in his field on an international level,” said Dr. Charles Snead, director of UA’s School of Music in the College of Arts and Sciences. “His success UA has been ongoing and consistent, and it has increased the productivity, reputation and national standing of our opera program.”

Houghtaling joined the UA faculty in 2007 and earned a doctorate at the City University Graduate Center in New York. He has turned the UA Opera Theatre during his tenure at UA into a program that emphasizes the whole musical performer demonstrating a range of skills.

“I wanted to build a training program wherein students would dive into acting and movement and dance and improvisation and stage combat and lots and lots of music,” Houghtaling said. “Thirteen years later, that’s what my program is most known for – it’s what the students learn in the program about the transition of skills onto the stage – that’s what very special about the UA Opera Theatre.”

The Frederick Moody Blackmon and Sarah McCorkle Moody Outstanding Professor Award is presented annually to a UA faculty member judged to have made extraordinary research contributions that reflect credit on the individual, his or her field of study and on the University. The honor was created by Frederick Moody Blackmon, of Montgomery, to honor the memory of his grandmother, Sarah McCorkle Moody, of Tuscaloosa.

Learn more about Dr. Houghtaling by reading the full article on the UA News site.