Craig Wedderspoon, UA professor of sculpture, said the University and city of Tuscaloosa have been working collaboratively to improve public art in the city since 2008.

“I was invited to be on a committee during the development of the Riverwalk to put together thoughts and art for along the Riverwalk,” he said. “That’s evolved into many other things that are still in the works.”

“I am thrilled by the progress of the Public Art Initiative,” Wolfe said. “Public art can add value economically as well as providing a sense of community.”

Wedderspoon said public art helps beautify a city whether individuals like the work or not. These places become visual breadcrumbs.

“Public art becomes gathering places,” he said. “It gets people more active in moving through their communities and visiting local businesses. Having public art out in front of a local business, like the mural on the side of Egan’s Bar, draws people.”

At the behest of PARA director Gary Minor, UA students and an alumnus created the “Amaryllis” pink flower sculpture at Monnish Park and the kaleidoscope sculpture at Snow Hinton Park. Both were installed in October 2018. 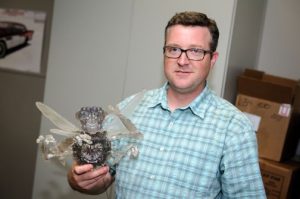 The idea for the little bronze monsters, brought to inanimate life by Wedderspoon’s sculpture students, stemmed from the city and Chamber of Commerce of West Alabama taking a trip to Greenville, South Carolina, about three years ago. There, they were inspired by a public art project called “Mice on Main,” which is a series of little bronze mice scattered throughout the city that’s become a tourist attraction.

“Our students really enjoy making the monsters,” Wedderspoon said. “It ties the city’s elementary school students and University into community.”

Learn more about the Public Art Initiative by reading the full article on the UA News site.