Lecture on slavery brings in professors from other institutions: Crimson White – March 19

Leslie M. Harris, professor of history at Northwestern University, will present a lecture on March 21 entitled “Slavery and the University: Histories and Legacies.” This event will also provide an environment where students can interact with professors who are coming to The University of Alabama for the lecture.

The best methods to help an endangered woodpecker in Alabama thrive are installation of artificial homes and controlled burning in forests, according to research from The University of Alabama.

The Greater Hartford Chapter of the American Guild of Organists is pleased to present a recital by internationally-acclaimed organist Faythe Freese on Sunday, April 7, 2019, at 4:00pm at Asylum Hill Congregational Church, 814 Asylum Avenue, Hartford … Dr. Freese, whose performances have been hailed as “powerful …masterful… impressive … brilliant” is Professor of Organ at The University of Alabama School of Music and much in demand as a recitalist around the world.

The University of Texas Permian Basin recently received close to $2 million from the UT System’s Science and Technology Acquisition and Retention program for use by five new and existing professors … Those awarded funds are Interim Chair of Mechanical Engineering Forrest Flocker; Omar Beg from UT Arlington; UTPB Associate Professor of Petroleum Engineering Zhengwen Zeng; Mohamed Zobaa, assistant professor of geosciences at UTPB; and Lauren Neal, a doctoral candidate at The University of Alabama. Neal will support current initiatives in psychology and kinesiology, information from the university said.

Our special guest tonight is Heather Hunt. She’s a University of Alabama student studying dance. She’s going to tell us all about their big Spring Showcase.
WVUA (Tuscaloosa) – March 21

‘Icepick to the Moon’

For the decades it took to launch “Icepick to the Moon” at Tuscaloosa, filmmaker Skyzz Cyzyk sought surviving members of the Raudelunas, his eyes focused on the Rev. Fred Lane. Lane is the swing-music-absurdist singer and wordmaker behind, among and in front of cult vinyl “From the One That Cut You” (1983) and “Car Radio Jerome” (1986), beloved among a small but fervent, fanatic base. Cyzyk’s feature-length documentary gets its Druid City debut at 7:30 p.m. Friday in Room 159 of Russell Hall on The University of Alabama campus, just blocks from Woods Hall where many of the Raudelunas collaborated.
AL.com – March 21 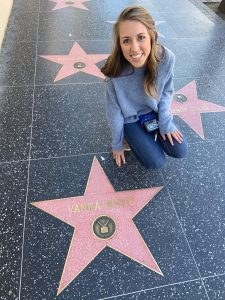 A student at The University of Alabama who is an avid fan of “Wheel of Fortune” has won big on the syndicated game show. On Friday night, Bethany Patterson, a sophomore who is also a member of the Million Dollar Band, won “Wheel” in the final moments of the show’s “College Week Spring Break,” where she competed against college students from across the country. Patterson, who is studying marketing, won $62,200 in cash and prizes, including a Volkswagen Golf GTI.
Crimson White – March 25