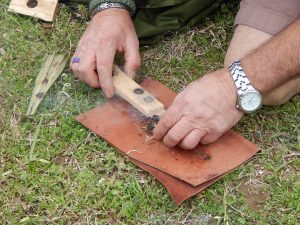 The ancient Native American art of making tools out of stone, bone or antler using only rocks will be on display this weekend at the 18th annual Moundville Knap-In. The event will be held Friday and Saturday at The University of Alabama’s Moundville Archaeological Park. “Flintknapping is a delicate skill, and we have some very talented people coming this year,” said Kayla Scott, education outreach coordinator at UA’s Moundville Archaeological Park. “Not only will they demonstrate how tools are made, attendees will see how they were used and be able to purchase tools that were made on-site.”
WVUA (Tuscaloosa) – Mar. 7
WVUA (Tuscaloosa) – Mar. 9

Calhoun County’s incumbent lawmakers at the end of February had a strong fundraising lead over their midterm election rivals, the latest campaign finance reports show … “The main value of incumbent money is to scare off potential opponents,” said Stephen Borrelli, who teaches political science at The University of Alabama.
The Cutoff News – Mar. 5

President Trump’s proposal to increase tariffs has already started a trade war — inside his own party … “Trump was overdue for delivering on his populist promises,” said George Hawley, an assistant professor of political science at The University of Alabama. “His few major victories in the first year were conventional conservative policies and appointments.

ThruPore, a catalyst company, has recently secured $540,000 in investment funding with the possibility of a 2:1 match through the National Science Foundation (NSF) Small Business Innovation Research (SBIR) Program.  CEO Franchessa Sayler and Martin Bakker, associate professor in the Department of Chemistry and Biochemistry co-founded ThruPore in 2011 at The University of Alabama. Sayler, then a graduate student at the University, was approached by an industrial chemist to discover a way to increase productivity of a reaction process by conducting catalysis research. Through this project, Bakker and Sayler saw the potential to market their catalyst.

Having memory lag? These 10 tips will help give it a boost!: SteemIT – Mar. 7

There is no need to be shy and trust me, no need to be ashamed. Memory lag happens to the best of us and all we need to do when it occurs is STOP to think what it was we were thinking or working on … According to Forest Scogin, an assistant professor at The University of Alabama, “the trick to getting your memory to function at top level is by getting something into the system efficiently so it is easy to retrieve.”

‘Everything You Love Will Burn’ provides helpful insights into the alt-right movement: TwinCities.com (Minnesota) – Mar. 8

A short time ago, most people ignored the furthest fringes of the radical right, secure in the knowledge that they were marginalized and sliding toward inevitable extinction. With the election of Donald Trump, and fears that white-nationalist extremists occupied the White House, the pendulum swung in the opposite direction. (Hawley is an assistant professor of political science at the University of Alabama. His books include “Right-Wing Critics of American Conservatism” and “Making Sense of the Alt-Right.”)

Far more dangerous than the far-right effort to win elections alone is its concerted campaign to change the culture — a strategy it owes, perversely, to the left … Alt-right leaders were enthusiastic about the election of Donald Trump — “even if they recognize he wasn’t really one of them,” says George Hawley, a political scientist at The University of Alabama and author of “Making Sense of the Alt-Right.”

STUDENTS WALK OUT OF CLASSROOMS NATIONWIDE: Thousands of students and teachers across the country today are expected to walk out of their school buildings, calling on lawmakers to pass stricter gun control laws and paying tribute to the 17 people murdered at Marjory Stoneman Douglas High School one month ago … “As a movement, the alt-right is in a difficult place right now,” said George Hawley, a University of Alabama professor who has studied the movement. “It is fractured by infighting and not winning many victories.” Kimberly Hefling and Benjamin Wermund have the full story.

If anyone in Forsyth County knows the family of Eugene H. Hodges, officials with The University of Alabama are trying to contact them to talk about a radio struck by a meteorite. Mary Beth Prondzinski, collections manager with the Alabama Museum of Natural History on the university’s campus, said the museum is searching for family members of the late Eugene Hodges, the owner of a radio of struck by a meteorite in the 1950s that is on display.

The mangrove rivulus, which is known as the tiny jumping fish, can leap farther as it gets older, new research shows. These fish, which can be found in the United States, are capable of “tail-flip jumping” many times their body length when out of water, allowing them find better find better habitats by escaping predators … “The next step in this line of research is to figure out whether genetic variation underlies differences in body structure associated with jumping performance in young fish,” said lead author Joe Styga, a doctoral candidate at The University of Alabama.
UPI – March 16
Science Newsline – March 18
Science Codex – March 18
Phys.org – March 18
Bright Surf – March 18
ScienMag – March 18