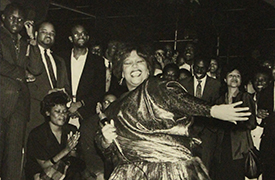 Fifteen students from Arcadia Elementary School will display their artwork alongside pieces from the Paul R. Jones Collection of American Art at The University of Alabama’s Paul R. Jones Museum from Jan. 10 to Feb. 23. During the semester, Dr. Lucy Curzon, UA associate professor of art and art history, worked with students once a week in an eight-week partnership class to sketch, draw, paint portraits, make collages and build musical instruments in the context of learning about jazz music and its relationship to the Paul R. Jones Collection of American Art.
Tuscaloosa News – Jan. 7

What do your sleeping patterns say about you?: The Guardian (U.K.) – Jan. 7

We spend a third of our lives either asleep or trying to sleep; for most of us, that’s more time than we spend on any other activity, including going to work. Yet we hardly ever talk about – or even think about – our sleep … In fact, if you scored around the 2.5 mark, you are sleeping about as well as the average person, at least according to a new study conducted at The University of Alabama.

Erin Dacy introduces you to some of the Million Dollar Band’s local talent: WAAY (Huntsville) – Jan. 7

The turnaround time from last weeks Sugar Bowl for Alabama and the Rose Bowl for Georgia is short — just seven days. It was a subject of the head coaches news conference today in Atlanta as they gear up for the national championship game tomorrow night. It’s also a quick turnaround for Alabama‘s million Dollar band. WAAY 31 special contributor Erin Dacy takes you on an “all access” trip to today’s Band practice in Sandy Springs, Georgia. Erin introduces you to some local band members.

State lawmakers who arrive for the start of the 2018 legislative session on Tuesday will likely be thinking more about calling campaign donors than fretting about gas taxes or prison construction … “I know the expression has been overused, but I believe they will try to ‘kick the can down the road’ as much as possible,” said William Stewart, professor emeritus of political sciences at The University of Alabama and a longtime observer of state politics.

He’s bad on foreign affairs but good on the economy: Law and Liberty – Jan. 9

I approach this task with more trepidation than I usually have when I write. I am not used to evaluating a presidency … Consider, by contrast, someone who effectively quashed radio criticism of his policies: Franklin D. Roosevelt. In 1934, as University of Alabama historian David Beito has noted, President Roosevelt’s FCC put radio stations on a short leash by reducing the license-renewal period from three years to six months.

When Alabama Gov. Kay Ivey delivers her first State of the State address Tuesday in Montgomery, it will be her most high-profile speech to date … “Whether she likes it or not, Kay Ivey’s campaign for governor essentially starts on Tuesday with her State of the State speech,” said Richard Fording, a political science professor at The University of Alabama. “She needs to present herself as a strong leader with an agenda, rather than a placeholder for the next elected governor.”
WTVY (Dothan) – Jan. 9

Oprah Winfrey’s Golden Globes speech may have sparked the latest national political buzz. But in Alabama, New Jersey Democratic Sen. Cory Booker is generating a buzz of his own … “Even though Alabama will ultimately vote for a Republican in the 2020 general election, Booker first has to win what will undoubtedly be a competitive Democratic primary,” said Richard Fording, a political science professor at The University of Alabama.

A mock-up of the city’s Singing River music sculpture has been unveiled, and work on building the 20-foot aluminum depiction of a musician will get underway soon. The committee that raised money for the work selected Eric Nubbe, a graduate student at The University of Alabama. Nubbe said he will build the aluminum sculpture at the university’s facilities in Tuscaloosa.
Venture Broadcasting – Jan. 10
Clay Center Dispatch (Kansas) – Jan. 10

A federally commissioned review of the Orlando Police Department’s response to the Pulse Nightclub massacre is drawing criticism from some active-shooter experts. Released last month, the 198-page report was produced by the Police Foundation, a D.C.-based nonprofit organization, at the request of the U.S. Department of Justice … Adam W. Lankford, a mass-shooting expert and criminology professor at The University of Alabama in Tuscaloosa, echoed those sentiments. “The active shooter is the source of the problem,” Lankford told PGN. “You have to focus on the source as quickly as possible. In other words, if you have a hole in the bottom of your boat, you don’t sit there and go into an in-depth plan on how to fix the hole. Every minute counts. You just fix it.”

While dolls might be a thing of your childhood, they can be art, too. Tomorrow is the last day to see “A Life With Dolls: The Dolls of Susan Hodgson,” an exhibit at the Gorgas House Museum on campus. Hodgson’s collection of dolls spans a range of cultures and is open for viewing from 9 a.m. to 4:30 p.m. today and tomorrow. The exhibit has been open since Nov. 20.

A well-known actor and humanitarian was honored at a banquet in Tuscaloosa. Danny Glover spoke at the banquet last night. As he reflected on Dr. Martin Luther King, Jr.’s legacy, he said we need to realize this is an important time.
Fox 6 (Birmingham) – Jan. 12
NBC 13 (Birmingham) – Jan. 12 and 13

Yellowhammer Radio Presents: Kyle Morris “The Conservative Savage” is a new political talk radio show featuring a millennial host that premieres Saturday on 101.1 WYDE in Birmingham and Huntsville. The show is the latest in Yellowhammer Multimedia’s expansions in news, film, TV and radio programs and will air every Saturday from 12 p.m. to 2 p.m. …Morris, a student at the University of Alabama and Yellowhammer News contributor, has gained a lot of attention on social media for his conservative take on politics, with more than 60,000 people following him on Twitter, which is where Yellowhammer CEO B.J. Ellis first noticed his tweets and recognized his potential.