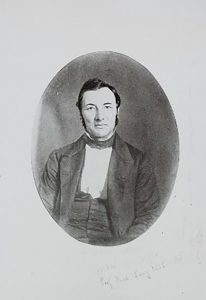 When Colonel Thomas M. Johnston and the Second Michigan Cavalry arrived in Tuscaloosa in 1865, they carried with them orders to destroy The University of Alabama—the Confederacy’s makeshift West Point at the time. The war was nearly over—Johnston arrived only five days before the surrender at Appomattox—and professors like Andre DeLoffré pleaded for campus, especially the library, to be spared. But the order to burn everything remained.

Still, some structures including the President’s Mansion were preserved. The president’s wife, Louisa Frances Garland and her story of bravery, riding on horseback to the rescue of her beloved mansion, would make University history. In September, the story of the old campus came to life in the chamber opera Freedom and Fire! A Civil War Story, created by UA professors and performed by UA students at Bryant-Jordan Hall.

The opera was born in part thanks to Dr. Paul Houghtaling, director of UA’s Opera Theatre who fell in love with Mrs. Garland’s story the first time he heard it. 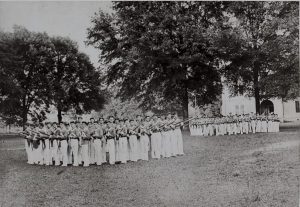 “I envisioned a type of Gone with the Wind scene with a sweeping aria and soaring music while a woman sang, ‘Please, don’t burn down this house; this is where I raised my children; it is my home and my hearth,” Houghtaling said.

But when Houghtaling commissioned poet and director of UA’s graduate program in creative writing, Professor Robin Behn, to write the libretto and assistant professor in the School of Music, Dr. Amir Zaheri, to compose the music, the team’s vision for the production began to change.

“We decided, through our research, that we needed to include all the lives that were affected by the events in those last few days of the war,” Behn said. “For example, we chose to show that the drum and bugle corps at the University was composed of musicians who were enslaved.”

Additionally, Mrs. Garland’s aria, in which she implores the Union soldiers not to burn down the mansion, became a duet sung in part by Mrs. Garland and in part by her enslaved servant—each of them describing what their life was like in the mansion.

Wanting to emphasize the ways these people not only co-existed but also impacted each other’s lives, Zaheri utilized a composition technique called counterpoint within the score. For each character or group of characters, he wrote a musical theme that could stand alone, but could also intricately harmonize with and change the emotional tone of other characters’ themes. 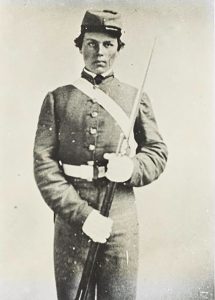 In total, the chamber opera took nearly two years to be completed. Its final form, a series of vignettes, tells the stories not just of Mrs. Garland, but also of young, 14-year-old students transformed into soldiers; a Union soldier who allowed the University librarian to save a single book from the flames; and a wedding amidst it all. As Behn said, “It dramatizes the complexity of the many lives caught up in the last days of the Civil War.”

Houghtaling directed and produced the program from scratch, organizing the costume design, set design, casting, and performance. Every aspect utilized UA talent and showcased students of the UA opera program.

“Everything that I do is for the students,” Houghtaling said. “It’s all about their experience, what they’re going to learn, and what they are going to gain from it. I think the experience of bringing a brand-new piece of work to life has been a great opportunity for them because they’ve had to use their own skill and their own musicianship to create the story from the ground up.”