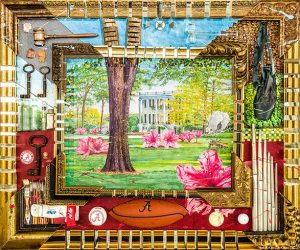 From the November 2015 Desktop News | A painting of UA’s historic President’s Mansion by internationally recognized artist and UA alumnus Nall was recently unveiled on Nov. 9 on campus to commemorate the 175th anniversary of the mansion’s construction.

The painting hangs in the lobby of UA’s Bryant Conference Center and is the first work by an Alabama artist to be installed there as part of a new public gallery of art from UA collections and Alabama artists.

The University of Alabama is making available limited edition, signed fine art giclée prints of the painting, sized at 19.5 by 23.5 inches, for $500.

Prints may be purchased by calling the Office of the Dean in the College of Arts and Sciences at 205/348-8538.

The President’s Mansion was built in 1841 and was designed by the architect Michael Barry. It is one of four buildings remaining today that survived the burning of the UA campus during the Civil War. It is the official residence of The University of Alabama’s president.

Nall, born in 1948 as Fred Nall Hollis, in Troy, earned his degree in art, political science and psychology from The University of Alabama and studied at the prestigious Ecole Nationale de Beaux Arts in Paris.

His works have been exhibited throughout the United States and internationally.

Nall’s work is held in permanent collections of the Boston Museum of Fine Art and the Bibliotec Nationale Paris, among others. He is the recipient of Mary Ellen LoPresti ARLIS/Southeast Publishing Award for Best Art Book for “Alabama Art” (Black Belt Press) and works to promote Alabama artists by curating their works into Retirement Systems of Alabama Hotels in Alabama.

He received the 1998 Alumnus Art Award by The University of Alabama’s Society for the Fine Arts, a Doctorate Honoris Causa from Troy University; and Alabama’s Distinguished Artist of the Year award from the Alabama State Council on the Arts.

Numerous hardcover books have been published on his work. Nall lives and works in Fairhope.