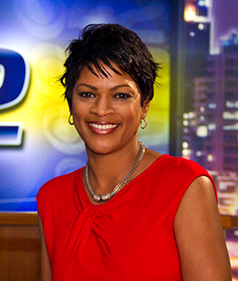 From the April 2013 Desktop News | Sherri Jackson, news anchor for CBS 42 in Birmingham and a member of the College’s Paul Jones Advisory Board, will be on campus this month to deliver the Helen Crow Mills and John Carroll Mills Endowed Lecture on April 26 at 11 a.m. in Farrah Hall.

Her lecture, “TV or Not TV: Is that the question? Why Ethics Must Cross Platforms for Journalists,” will address the evolving nature of how journalists approach reporting the news. She will address questions of both personal and professional ethics in journalists’ use of social media in their reporting.

Voted “Best News Anchor” in Alabama by the Alabama Broadcasters Association, Jackson has received recognition for her work covering AIDS in the city of Birmingham. Her piece “AIDS from Alabama to Africa” received a national award from the National Association of Black Journalists.

She has also received the Stand Up to Cancer Alabama Broadcaster Association’s ABBY 2009, the “Continuing the Dream” RTDNA/UNITY Award 2011, and the 2010 Friend of Children Children’s Advocacy Award from Childcare Resources. Jackson also works with area schools to help CBS 42 spotlight talented youth in the annual CBS 42 Black History Month Vignettes.

Jackson came to CBS 42 in 1998 after working for WGXA-TV in Macon, GA; WSAV-TV in Savannah, GA; and WSAZ-TV in Charleston, SC, and Huntington, WV. She is a graduate of Morehead State University, and is a member of Delta Sigma Theta Sorority Inc., Radio Television Digital News Association, and the National Association of Black Journalists. She currently serves as vice president of broadcast for the Birmingham Association of Black Journalists.

Jackson has served on several boards with nonprofit organizations that serve women and children including Childcare Resources, The Foundry, and the UAB Comprehensive Cancer Center. She previously served on the board for the Children’s Aid Society and Red Cross Blood Services.

The Mills lectureship was established and endowed by Mrs. Helen Mills Pittman and her late husband, Dr. John Mills of Birmingham, to bring successful and distinguished alumni and citizens to campus to speak as a way to motivate and inspire students.