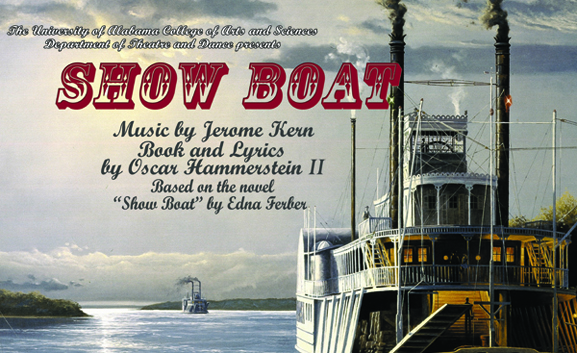 From the March 2013 Desktop News | Some 70 student actors, set designers, and theatre technicians will travel to Mobile next month to present a production of “Show Boat,” at the Mobile Civic Center Theatre on April 11.   Considered to be one of the most influential musicals of the 20th century, “Showboat” will be presented in Mobile by the Department of Theatre and Dance before bringing it to the stage at the Marian Gallaway Theatre on The University of Alabama campus. This is the second time the department has taken a large-scale production to a major Alabama city. .

The production is supported by UA President Judy Bonner, the UA Office of Academic Affairs, and the College of Arts and Sciences.  Mobile sponsors include Regions Bank, and “Mobile Bay” magazine.

After the success of 2011’s “Big River” in Montgomery, the department began making plans to take another production on the road. Professor Bill Teague, chair of the Department of Theatre and Dance, said that Mobile was a natural fit.

“We always wanted to do a show in Mobile because we have lots of alumni in the area, so Mobile was not a hard choice,” he said.

When considering which production to do, Teague said they wanted to choose something that would showcase their students’ talents. “Show Boat” is known for having some of the most beautiful music ever written on Broadway.

“Show Boat” was originally produced in 1927 with music by Jerome Kern and book and lyrics by Oscar Hammerstein II. The musical was based on Edna Ferber’s bestselling novel of the same name, and it follows the lives of the performers, stagehands, and dock workers on the Cotton Blossom, a Mississippi River show boat, over 40 years, from 1887 to 1927. The musical made American classics of such songs as “Ol’ Man River,” “Make Believe,” and “Can’t Help Lovin’ Dat Man.”

“This show is really an important play in its own right and is considered the first real American musical,” Teague said. “Up until the 1920s most of what had been seen was musical reviews and lighthearted comedies. This was the first play that integrated a dramatic story with music.”

For this production, there will be 43 actors on stage, an orchestra of 12, and a student technical crew of approximately 15 people. Teague said the entire cast and crew has been working diligently to make the play a success. Also, this production will be the final regular season show for the Department’s founding chair, Dr. Ed Williams, who will direct “Show Boat” before retiring after 40 years of service to the Department.

Tickets for the April 11 show in Mobile may be purchased at the Mobile Civic Center Box Office or through Ticketmaster at 1-800-745-3000, on the web at www.ticketmaster.com, or at any Ticketmaster outlet.